This morning Mnuchin was interviewed by CNBC.  He was the headline of the day, despite saying nothing new.

When trade talks broke down in early May, the Trump administration said they were 90% of the way to a deal.  But China balked and reneged on concessions.   Mnuchin said the same thing today (we were 90% there), and the media presented it as if he said progress was made this week, heading into the meetings. That’s not what he said.

Let’s talk about the backdrop heading into the weekend negotiations.  Remember, Trump is in the driver’s seat in this negotiation.  He can’t force a good deal, but he can claim victory on the trade front just by doing ‘a’ deal.

With that in mind, as we’ve discussed over the past month, he seems to be attempting to surgically optimize the economy heading into next year’s election.  He’s been fighting for a Fed rate cut, and through introducing heightened risks of a standstill on trade, he’s gotten what looks like Fed compliance coming down the pike (for a July cut).

The timeline set up perfectly for a June rate cut, and then for Trump to settle on a China deal at the G20 meeting.  The economy would have launched like a rocket-ship.  The Fed didn’t comply.

With that, at this weekends Trump/Xi meeting, let’s see if Trump extends the timeline on new tariffs, to get through the July Fed meeting (in hopes of getting his Fed fuel for the economy).   At this point, the market has backed the Fed into the corner, with high expectations of not just 25 bps, but a 50 bps cut.  Without an extension of trade uncertainty, those expectations will sustain if not grow.

Now, we’ve discussed over the past month, the prospects for this trade war with China ending with a grand and coordinated currency agreement — perhaps a big depreciation of the dollar, similar to the 80s “Plaza Accord.”

As I said a couple of weeks ago, we may wake up one day and find a similar agreement has been made between the U.S. and major global trading partners (which may include China, or not).  It might be a deal between the U.S. and China to “revalue” the yuan (i.e. strengthen it).  Or it may exclude China (just G3 economies).  An interesting takeaway from this morning’s interview with Mnuchin:  Mnuchin did make a point to emphasize that they look forward to many bi-lateral meetings at the G-20 — not just with China.

How do you position for a dollar devaluation?  Buy commodities.  Is that what the move in gold is telling us (and Bitcoin)?  Maybe.

Will The Market Test The Fed? Likely.

The Fed held the line on rates today, passing up an opportunity to surprise markets with a cut.  The economy seems to be in position to easily absorb it, with soft inflation.

Not surprisingly, they did make plenty of efforts to massage market sentiment.  They stayed on message that they are prepared to act to sustain the economic expansion.  And half of the Fed Presidents now see at least a cut by the end of the year.

What is clear, coming from the Fed Chair’s press conference, is that this is all about the China trade deal.  If it drags out, sentiment continues to erode.  When sentiment erodes, the economic momentum will erode.  If that’s the case, they will be reactive, with stimulus (rate cuts and/or slowing the runoff of Treasuries on the Fed balance sheet).

On the other hand, if we get a deal on trade, the Fed is off the hook — no rate cut.

And they seem to be comfortable, at the moment, holding their fire as long as economic conditions are still holding solid.

The question now is, will they be tested?  Sure a deterioration in sentiment can show up with consumer activity or business confidence. But more likely/ more immediately it would be in financial markets.

With stocks just a percent off of highs, they aren’t being tested at the moment.  However, a sharp move lower in stocks and I suspect we would see the Fed step in, and quickly.  The other spot that could test them is the yield curve.

This Market Decline Is A Gift To Get Involved
Closing The Jaws On Old Economy Versus New Economy
Bond Market Is Still Short Of Pricing In Fed’s 200 BPS Of Hikes
Trillion-Dollar Amazon May Have Signaled The Top In Euphoria
Best Investing Advice: ‘Don’t Fight Trump’
Gold and Yields Telling Two Different Stories, Which One Is Right?

We talked yesterday about the building pressure in emerging markets, driven by weakening currencies and rising dollar-denominated oil prices.

With that bubbling up as a potential shock risk, gold hasn’t exactly been telling the story of elevated risks. 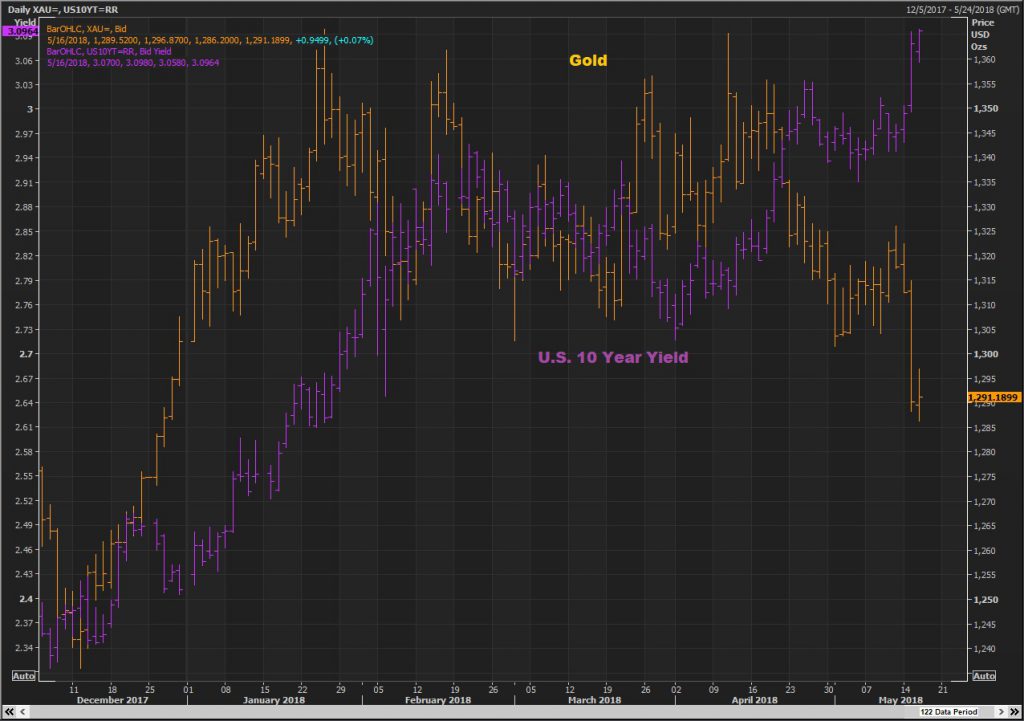 You can see in this chart above, since the tax cuts were passed in late 2017, rates have been rising (the purple line). This is a hotter economy, pick-up in inflation story. And, as it should, gold stepped higher with rates all along–until the last few weeks. You can see the divergence in the chart above.

I suspect we’ll see gold snap back to reflect some increasing market risks, and especially to reflect a world where central banks are beginning to finally see inflation pressures build. The gold bugs loved gold when inflation was dead. And now that it’s building, they are surprisingly very quiet.

Yields continue to grind higher toward 3%.  That has put some pressure on stocks, despite what continues to be a phenomenal earnings season.  This creates another dip to buy.

Yesterday, we talked about a reason that people feel less good about stocks, with yields heading toward 3%.   [Concern #1] It conjures up memories of the “taper tantrum” of 2013-2014.  Yields soared, and stocks had a series of slides.

My rebuttal: The domestic and global economies are fundamentally stronger and much more stable.  But maybe most importantly, the economy (still) isn’t left to stand on its own two feet, to survive (or die) in a normalizing interest rate environment.  We have fiscal stimulus doing a lot of heavy lifting.

Let’s look at a couple of other reasons people are concerned about stocks as yields climb:

[Concern #2] Maybe this is the beginning of a sharp run higher in market interest rates — like 3% quickly becomes 4%?

My Rebuttal: Very unlikely given the global inflation picture, but more unlikely with the Bank of Japan still buying up global assets in unlimited amounts (Treasuries among them, through a variety of instruments). They can/and are controlling the pace, for the benefit of stimulating their own economy and for the benefit of stimulating and maintaining stability in, the global economy.

[Concern #3] I hear the chatter about how a 3% 10-year note suddenly creates a high appetite for Treasuries over stocks at this point, especially from a risk-reward perspective (i.e. people are selling stocks in favor of capturing that scrumptious 3% yield).

My Rebuttal:  In this post-crisis environment, a rise toward 3% promotes the exact opposite behavior.  If you are willing to lend for 10-years locked in at a paltry rate, you are forgoing what is almost certainly going to be a higher rate decade than the past decade.  If you need to exit, you’re going to find the price of your bonds (very likely) dramatically lower down the road.  Coming out of a zero-interest rate world, bond prices are going lower/not higher.

The bond market has become a high risk-low reward investment.  Meanwhile, with earnings set to grow more than 20% this year, and stock prices already down 7% from the highs of the year, we have a P/E on stocks that continues to slide lower and lower, making stocks cheaper and cheaper.  That makes stocks a far superior risk/reward investment, relative to bonds – especially with the prospects of the first big bounce back in economic growth we’ve seen since the Great Recession.

Long Term Bear Cycle For The Dollar Is Fuel For Commodities

Yesterday we talked about the commodities bull market and the move underway in natural gas.

That all continued today, thanks in part to a comment by the U.S. Treasury Secretary, saying “obviously a weaker dollar is good for us.”  When the dollar goes down, commodities prices tend to go up, since they are largely priced in dollars.  As such, commodities were the top performers of the day – beginning to gain more momentum at multi-year highs.

But as we’ve seen from this chart, this recovery in commodities, which has dramatically lagged in the reflation trade, has a long way to go.

While the markets reacted as if Mnuchin, the Treasury Secretary, was talking down the dollar, the dollar is already in a long-term bear market cycle.

Remember, we looked at this chart (below) of the long-term dollar cycles back in June…

And I said, “if we mark the top of the most recent cycle in early January, this bull cycle has matched the longest cycle in duration (at 8.8 years) and comes in just shy of the long-term average performance of the five complete cycles.  The most recent bull cycle added 47%. The average change over a long-term cycle has been 56%.  This all argues that the dollar bull cycle is over.  And a weaker dollar is ahead.  That should go over very well with the Trump administration.”

The dollar is down about 8% since then and is breaking down technically now.

The dollar index is now down 14% in this new bear cycle. And these are the early innings.  Based on the dollar cycle, it has a long way to go, and should last for another 5 to 7 years.

So, this dollar outlook is further support for the case for a big run in commodities we’ve been discussing.  And as we observed yesterday, in the case of Chesapeake Energy (CHK), the second largest producer of natural gas in the country, the commodities stocks are still extremely underpriced if this scenario for commodities plays out.

For help building a high potential portfolio, follow me in our Billionaire’s Portfolio subscription service, where you look over my shoulder as I follow the world’s best investors into their best stocks.  Our portfolio of highest conviction, billionaire-owned stocks is up close to 50% over the past two years.  You can join me here and get positioned for a big 2018.