Why Is Wall Street Always Worrying About China?

First, a bit of background. Over the past twenty years, China’s economy has grown more than fourteen-fold! … to $10 trillion. It’s now the second largest economy in the world. 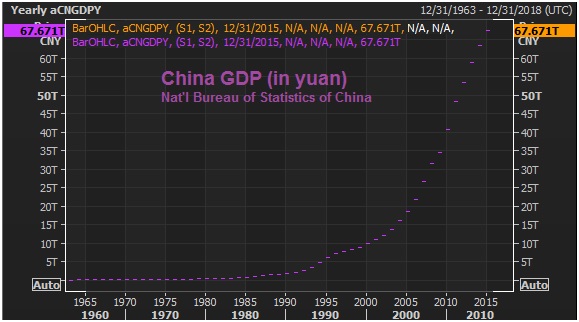 During the same period, the U.S. economy has grown 2.5x in size.

So how did China achieve such an ascent and position in the global economy? One word: Currency.
To follow the stock picks of the world’s best billionaire investors, subscribe at Billionaire’s Portfolio.
For a decade, China maintained a fixed exchange rate policy — the yuan was pegged against the dollar. One U.S. dollar bought 8.27 yuan. This allowed China to undercut the rest of the world, churning out cheap commoditized goods, competing on one thing: Price.

But in 2005, China changed its currency policy. It abandoned the peg.

After political tensions rose between China and its key trading partners, namely the U.S., China adopted a “managed float.” Under this policy China agreed to let the yuan trade in a defined daily trading band, while gradually allowing it to appreciate. This was China’s way of pacifying its trading partners while maintaining complete control over its currency.

Over the next three years the Chinese yuan climbed 17 percent against the dollar, enough to ease a politically sensitive issue, but far less than the relative economic growth would warrant. In fact, China’s economy grew by 43 percent while the U.S. economy grew only 10 percent.

That timeline leads us up to the bursting of the global credit bubble. What caused it? The housing bubble can be credited to a key decision made by the government sponsored credit agencies (Fitch, Standard and Poors, Moody’s), all of which stamped AAA ratings on the mortgage bond securities that Wall Street was churning out.

With a AAA rating, massive pension funds couldn’t resist (if they wanted to keep their jobs) loading up on the superior yields these AAA securities were offering. That’s where the money came from. That’s the money that was ultimately creating the demand to give anyone with a pulse a mortgage. That mortgage was then thrown into a mix of other mortgages and the ratings agencies stamped them AAA. They rinsed and they repeated.

But where did all of the credit come from in the first place, to fuel the U.S. (and global) consumption, the stock market, jobs, investment, government spending … a lot of the drivers of the capital that contributed to the pin the pricked the global credit bubble (i.e. the U.S. housing bust)? It came from China.
China sells us goods. We give them dollars. They take our dollars and buy U.S. Treasuries, which suppresses U.S. interest rates, incentives borrowing, which fuels consumption. And the cycle continues. Here’s how it looked (and still looks): 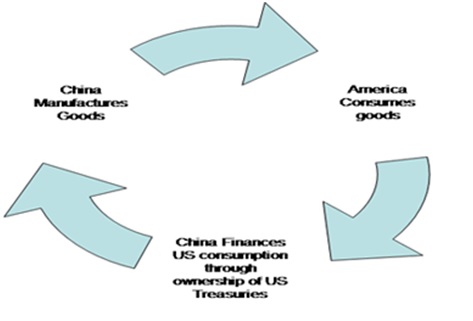 The result: China collects and stockpiles dollars and perpetuates a cycle of booms and busts for the world.
That’s the structural imbalance in the world that led to the crisis, and that problem has yet to be solved. And the outlook, longer term, for a solution looks grim because it requires China to move to develop a more robust, and consumer led economy. That structural shift could take decades. And going from double digit growth to low single digit growth in the process is a recipe for social uprising of its billion plus people.

In the near term, the likelihood that China will fight economic weakness with a weaker currency is high. We’ve seen glimpses of it since August. And the hedge fund community is ramping up bets that it’s just starting, not ending. 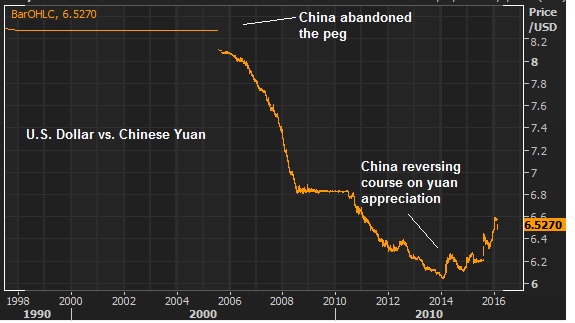 Above is a look at the dollar vs the yuan chart (the line going lower represents yuan appreciation, dollar depreciation). Longer term, China’s weak currency policy is a threat to economic stability and geopolitical stability. But short term, it could be a shot in the arm for their economy and for the global economy.

To get our best of the best portfolio of billionaire owned stocks at our new Billionaire’s Portfolio, subscribe today.

The goal of the Billionaire’s Portfolio is simple: to provide retail investors with the same plain-vanilla stock investments that the world’s greatest billionaire investors and hedge funds own. And our subscribers can invest alongside these billionaires without the typical $5 million minimum investments and paying big hedge fund management and performance fees. Instead, they get access to our best of the best portfolio of billionaire owned stocks for just $297 a quarter.