Oil Prices, A Big Factor For Fed
Can Stocks Force The Hand Of The Fed … Again
V-Shaped Recovery For Oil Prices Underway
Fed On Hold Drives Green Across The Screen For January
Big Trendline Break In Stocks
Key Charts
Collapse In Oil Prices Have Taken The Pressure Off Of The Fed

Earlier this month, we talked about the big fall in oil prices.

If we look back over the past five years, the magnitude of that move is only matched (or exceeded) in cases where there was significant manipulation in the oil market and/or a systemically threatening oil price crash.

As we’ve discussed, the pressure on oil this time around seems to be about manipulation — and appears to have everything to do with Trump’s leverage over the Saudis (related to sanctioning the Kingdom over the Khashoggi murder).

But we’ve now traded down to the important $50 mark.  That’s 35% from the highs of just October 3.  And this is an inflection point where it could go bad, but it also could present a goldilocks scenario (a level that’s just right for the U.S. economy).

Sure, cheap oil is good for consumers.  You save a few extra bucks at the pump.  But in the current environment, it presents risks to the financial system.  The shale industry’s break-even point on producing oil is said to be $50.  Below that, they dial down production, lay off workers, stop investing and quickly become a default risk to their creditors (U.S. and global banks).  We saw it back in 2016.  The same can be said for those countries heavily dependent on oil revenues (i.e. they become default risks as oil prices move lower).

That’s the bad side. The good side to the oil price slide?  As we’ve discussed, it should relieve some pressure on the Fed. The Fed likes totalk about their inflation readings excluding effects of volatile oil prices.  But they have a record of acting on monetary policy when oil is moving.

The bottom line: Oil plays a big role in their view on inflation.  And given the quick drop in oil prices, the Fed’s concerns about inflation should be cooling. Again, this opens up the door for the Fed Chair, tomorrow, to take the opportunity in a prepared speech at the Economic Club of New York, to signal a pause coming in the Fed’s rate normalization program. That would be a positive catalyst for economic and market confidence.

What stocks do you buy?  Join me here to get my curated portfolio of 20 stocks that I think can do multiples of what broader stocks do, coming out of this market correction environment.
Gridlock In Washington Should Give The Fed An Excuse To Pause
Oil Decline Will Change The Inflation Picture

In the past two notes, I’ve focused on oil.  And that does indeed seem to be the tail that is wagging the global markets dog.

If we look back over the past five years, the magnitude of that move is only matched (or exceeded) in cases where there was significant manipulation in the oil market and/or a systemically threatening oil price crash. 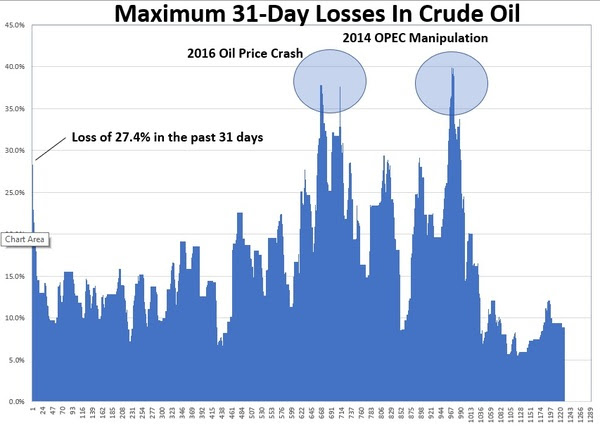 Interestingly, these historic crude price declines were occurring as the Fed was preparing markets for the beginning of its normalization campaign (i.e. moving rates away from the emergency zero interest rate level).  And it was these price declines that threw a wrench in those plans.

Despite what the central bankers say, oil prices have a big influence on their read on inflation.  Lower oil prices put downward pressure on inflation.  And as oil prices were plunging from 2014 through 2016, the Fed clearly and dramatically held back on their rate hiking plans.

On that note, remember yesterday we talked about the prospects that Powell (Fed Chair) may use the opportunity to dial down expectations of a December rate hike, if we see some soft data this week (growth data from Japan and Europe and inflation data from U.S., Europe and UK).  We now have a big haircut on oil prices to factor into the inflation data.  That too, may give him the excuse to pause on rates.  We’ll hear from him tomorrow at a Dallas Fed meeting.

Join me here to get all of my in-depth analysis on the big picture, and to get access to my carefully curated list of “stocks to buy” now.
Momentum Building For A Big Run In Markets And The Economy Into The Year End