U.S. Steelmakers That Should Win From ‘The Wall’

The Fed sent a message to markets on Friday that they will pause on rates hikes, if not stand ready to act (i.e. cut rates or stop shrinking the balance sheet), unless market conditions improve.

With that support, stocks continue to rebound.  But as the market focus is on stocks, the quiet big mover in the coming months might be commodities.

Over the weekend, the President confirmed that the $5 billion+ border wall would be made of steel — produced by U.S. steel companies.   Add to that, it’s fair to expect that the next item on the Trumponomics agenda, will be a big trillion-dollar infrastructure spend (an initiative believed to be supported by both parties in Congress).

Trump has also threatened to move forward with the wall under an executive order, citing national security.  With that, the execution on the wall, regardless of the state of negotiations on Capitol Hill should be coming sooner rather than later.

Let’s take a look today at a few domestic steel companies that should benefit.

Nucor corp is the largest steel producer in the United States. 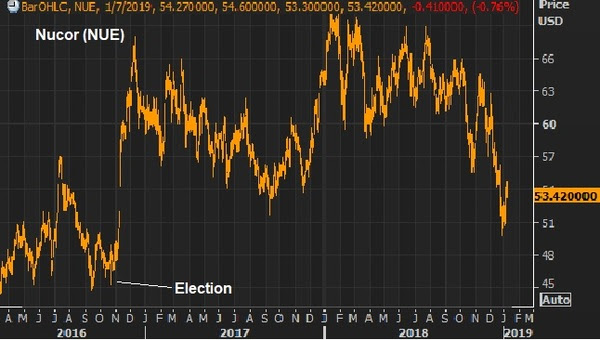 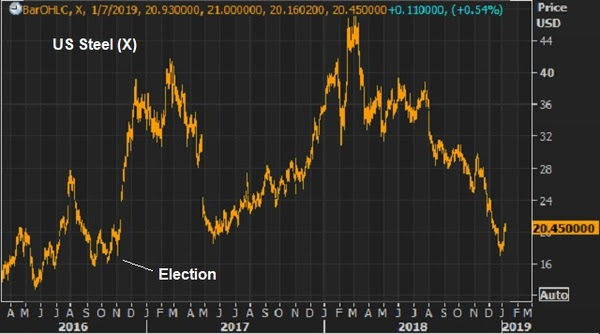 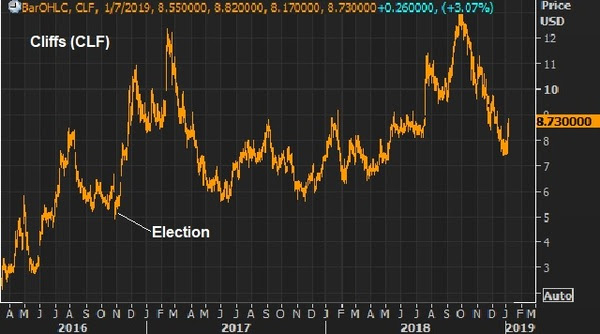 As you can see, these stocks all benefited early on (post election) on the prospects of Trump’s America First economic plan.  But, like the broader market, these stocks are all well off of the 2018 highs now — driven by the intensified trade dispute with China over the past year, the uptick in  global economic risks, and the concern over Trumponomics policy execution with a split Congress.  They look very, very cheap considering the outlook for domestic steel demand.

Disclosure:  We are long Cliffs (CLF) in our Billionaire’s Portfolio.