The formula for GDP is consumption + investment + government spending + net exports.  So you can see in these components, the direct targeting of economic stimulus in the Trump economic plan to drive growth: tax cuts, deregulation, repatriation, infrastructure and trade negotiations.

Now, consumption makes up about two-thirds of GDP.  Let’s look at consumption today, and we’ll step through the other contributors to GDP over the next few days.

First, what is the key long-term driver of economic growth over time?  Credit creation.  When credit is used to buy productive resources, wealth goes up.  And when wealth goes up consumption tends to go up.  With that in mind, in the chart below you can see the sharp recovery in consumer credit (in orange) since the depths of the economic crisis (this excludes mortgages).  And you can see how closely GDP (the purple line, economic output) tracks credit growth. 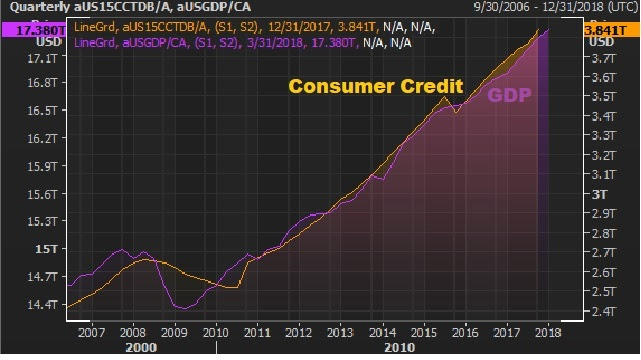 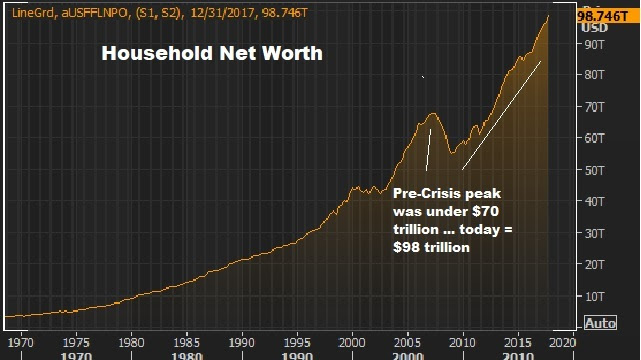 A large contributor to the state of consumption is the recovery and stability in housing.  We are now back to new highs on the broad housing index … 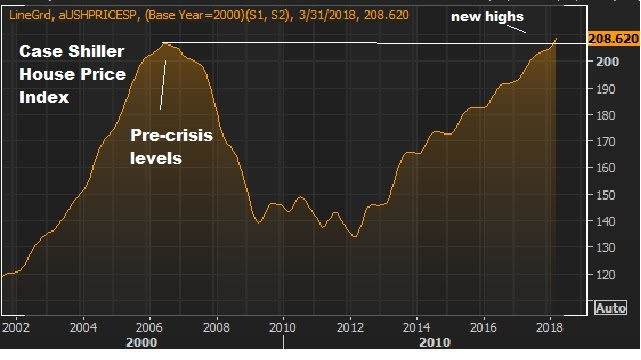 When we consider this solid backdrop, remember, we’ve yet to have a return of ‘animal spirits’ —  a level of trust and confidence in the economy that fuels more aggressive hiring, spending and investing.
And with that, as we discussed yesterday, while we are in the second longest post-War economic expansion, we’ve yet to have the aggressive bounce back in growth that is characteristic of post-recession recoveries.
But we now have the pieces in place to see the return of animal spirits and a big pop in economic growth.  And that should continue to fuel for much higher stock prices. And there are stocks that will do multiples of what the broader stock market does.
If you are hunting for the right stocks to buy on this dip, join me in my Billionaire’s Portfolio. We have a roster of 20 billionaire-owned stocks that are positioned to be among the biggest winners as the market recovers.
Commodities Quietly Breaking Out

Last week, rising market interest rates in the U.S. were becoming a concern.  But as we discussed on Friday, we ended the week with a big bearish reversal signal in the 10-year yield.  This week, the market focus seems to be shifting toward a lower dollar and higher commodities.

Friday’s bearish signal in rates seems to have foreshadowed the news coming into today’s session, that Italy is putting forward an agreement for a coalition government that would break compliance from EU rules (an “Italy first” approach to an economic and social agenda).

And that means money goes into U.S. Treasuries too.  So you can see U.S. yields (the purple line in the chart below) backing off of the highs of last week, and with room to move back toward 3% (or below) if this dynamic in Italy continues to elevate the risk environment.

Today, Larry Kudlow, the Chief Economic Advisor to the White House, carefully crafted a response on the dollar, as to not say they favored it “stronger.”  That’s probably enough, given the rising risks in emerging markets, to get the dollar moving lower (to alleviate some of the pain of buying dollar-denominated oil for some of the EM countries).

And it may be the signal for commodities to start moving again.  Because most commodities are priced in dollar, commodities prices tend to be inversely correlated to the dollar.

Today we had a fresh three-year high in the benchmark commodities index (the CRB Index).

Here’s an excerpt from one of my Forbes Billionaire’s Portfolio notes back in June, on the building momentum for commodities: “The technology sector minted billionaires over the past decade.  It’s in commodities that I think we’ll see the new billionaires minted over the next decade.  The only two times commodities have been this cheap relative to stocks was at the depths of the Great Depression in the early 30s and at the end of the Bretton Woods currency system in the early 70s.  Commodities went on a tear both times.”

We’ll take a closer look at this tomorrow.

Yields continue to grind higher toward 3%.  That has put some pressure on stocks, despite what continues to be a phenomenal earnings season.  This creates another dip to buy.

Yesterday, we talked about a reason that people feel less good about stocks, with yields heading toward 3%.   [Concern #1] It conjures up memories of the “taper tantrum” of 2013-2014.  Yields soared, and stocks had a series of slides.

My rebuttal: The domestic and global economies are fundamentally stronger and much more stable.  But maybe most importantly, the economy (still) isn’t left to stand on its own two feet, to survive (or die) in a normalizing interest rate environment.  We have fiscal stimulus doing a lot of heavy lifting.

Let’s look at a couple of other reasons people are concerned about stocks as yields climb:

[Concern #2] Maybe this is the beginning of a sharp run higher in market interest rates — like 3% quickly becomes 4%?

My Rebuttal: Very unlikely given the global inflation picture, but more unlikely with the Bank of Japan still buying up global assets in unlimited amounts (Treasuries among them, through a variety of instruments). They can/and are controlling the pace, for the benefit of stimulating their own economy and for the benefit of stimulating and maintaining stability in, the global economy.

[Concern #3] I hear the chatter about how a 3% 10-year note suddenly creates a high appetite for Treasuries over stocks at this point, especially from a risk-reward perspective (i.e. people are selling stocks in favor of capturing that scrumptious 3% yield).

My Rebuttal:  In this post-crisis environment, a rise toward 3% promotes the exact opposite behavior.  If you are willing to lend for 10-years locked in at a paltry rate, you are forgoing what is almost certainly going to be a higher rate decade than the past decade.  If you need to exit, you’re going to find the price of your bonds (very likely) dramatically lower down the road.  Coming out of a zero-interest rate world, bond prices are going lower/not higher.

The bond market has become a high risk-low reward investment.  Meanwhile, with earnings set to grow more than 20% this year, and stock prices already down 7% from the highs of the year, we have a P/E on stocks that continues to slide lower and lower, making stocks cheaper and cheaper.  That makes stocks a far superior risk/reward investment, relative to bonds – especially with the prospects of the first big bounce back in economic growth we’ve seen since the Great Recession.