With the potential government shutdown looming, let’s look at some perspective on government debt.

As we discussed early in the week, the policy execution pendulum for the Trump administration has swung over the past four months, from winless to potentially two big wins by the year end.

As I’ve said, with a massive corporate tax cut coming and big incentives for companies to build, invest and bring money back home (from overseas), we should be entering an economic boom period — one we have desperately needed, post-recession, but haven’t gotten.

Still, there are people that hate the tax cut idea.  They think the economy is fine shape. And that debt is the problem.  The Joint Committee on Taxation is the go to study for those that oppose the tax cuts. The study shows not a lot of growth, and disputes the case that the tax cuts will pay for themselves through growth.

What the headlines that cite this study don’t say, is that the study has huge assumptions that drive their conclusions.  Among them, that creating incentives to repatriate $3 trillion in offshore corporate money will only contribute about a fifth of the taxable value of that amount of money. And they assume that the Fed will hike rates at a pace to precisely nullify any gains in economic activity (which wouldn’t be smart, unless they want to go revisit another decade of QE).

Now, with this study in mind, people are fearing the debt implications, on what is already a large debt load.  And they fear that global investors might start dumping our Treasuries, as a result.

This has been a misguided fear throughout much of the post-financial crisis environment.  Conversely, international investors have flocked into our Treasuries (lending us money), as the safest parking place for their capital. Why?

For perspective on the debt load and the fiscal stimulus decision, as we discussed earlier this week: “The national debt is a big number.  But so is the size of our economy – about $19 trillion.  Sovereign debt isn’t about the absolute number. It’s about the size of debt relative to the size of the economy.  With that, it’s about our ability to service that debt at sustainable interest rates.  The choice of austerity in this environment, where the economy is fragile and growth has been sluggish for the better part of ten years, would send the U.S. economy back into recession (as it did in Europe). And the outlook for re-emerging would be grim.  That would make our debt/gdp far inferior to current levels — and our ability to service the debt, far inferior.”

Add to this, the increase in sovereign debt relative to GDP, has been a global phenomenon, following the financial crisis.  Much of it has to do with the contraction in growth and the subsequent sluggish growth throughout the recovery (i.e. the GDP side of the ratio hasn’t been carrying it’s weight). 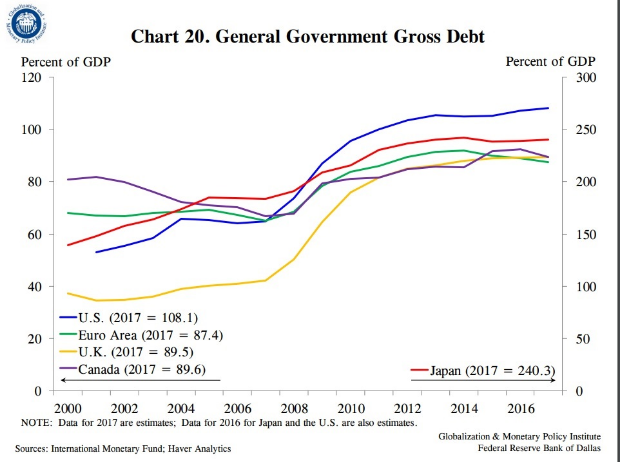 You can see in the chart above, the increasing debt situation isn’t specific to the U.S.

The euro zone tried the path of austerity back in 2011, and quickly found themselves back in recession, only re-emerging by promising to backstop the failing countries in the monetary union, and launching a massive QE program.