Economy Looks Like Early Stages Of An Economic Boom

As I said on Friday, people continue to look for what could bust the economy from here, and are missing out on what looks like the early stages of a boom.

We constantly hear about how the fundamentals don’t support the move in stocks.  Yet, we’ve looked at plenty of fundamental reasons to believe that view (the gloom view) just doesn’t match the facts.

Remember, the two primary sources that carry the megahorn to feed the public’s appetite for market information both live in economic depression, relative to the pre-crisis days.  That’s 1) traditional media, and 2) Wall Street.

As we know, the traditional media business, has been made more and more obsolete. And both the media, and Wall Street, continue to suffer from what I call “bubble bias.”  Not the bubble of excess, but the bubble surrounding them that prevents them from understanding the real world and the real economy.

As I’ve said before, the Wall Street bubble for a very long time was a fat and happy one. But the for the past ten years, they came to the realization that Wall Street cash cow wasn’t going to return to the glory days.  And their buddies weren’t getting their jobs back.  And they’ve had market and economic crash goggles on ever since. Every data point they look at, every news item they see, every chart they study, seems to be viewed through the lens of “crash goggles.” Their bubble has been and continues to be dark.

Also, when we hear all of the messaging, we have to remember that many of the “veterans” on the trading and the news desks have no career or real-world experience prior to the great recession.  Those in the low to mid 30s only know the horrors of the financial crisis and the global central bank sponsored economic world that we continue to live in today. What is viewed as a black swan event for the average person, is viewed as a high probability event for them. And why shouldn’t it?  They’ve seen the near collapse of the global economy and all of the calamity that has followed. Everything else looks quite possible!

Still, as I’ve said, if you awoke today from a decade-long slumber, and I told you that unemployment was under 5%, inflation was ultra-low, gas was $2.60, mortgage rates were under 4%, you could finance a new car for 2% and the stock market was at record highs, you would probably say, 1) that makes sense (for stocks), and 2) things must be going really well!  Add to that, what we discussed on Friday:  household net worth is at record highs, credit growth is at record highs and credit worthiness is at record highs.

We had nearly all of the same conditions a year ago.  And I wrote precisely the same thing in one of my August Pro Perspective pieces.  Stocks are up 17% since.

And now we can add to this mix:  We have fiscal stimulus, which I think (for the reasons we’ve discussed over past weeks) is coming closer to fruition.

The Trump Trend In Stocks Is Breaking Down

As we head into the Fed tomorrow, stocks have fallen back a bit today.

Yesterday we looked at the nice 45 degree climb in stocks since Election Day.  And the big trendline that looked vulnerable to any disruption in the optimism that has led to that climb.  That line gave way today, as you can see.

The run up, of course, was on the optimism about a pro-growth government, coming in after a decade of underwhelming growth. The dead top in stocks took place the day after President Trump’s first speech before the joint sessions of Congress.  There is a phenomenon in markets where things can run up as people “buy the rumor/news” and then sell-off as people “sell the fact.”

It’s a reflection of investors pricing new information in anticipation of an event, and then selling into the event on the notion that the market has already valued the new information. It looks like that phenomenon may be transpiring in stocks here, especially given that the timeline of tax reform and infrastructure spending looks, now, to be a longer timeline than was anticipated early on.

And as we discussed yesterday, it happens to come at a time where some disruptive events are lining up this week: from a Fed rate hike, to Dutch elections, to Brexit, to G20 protectionist rhetoric.

Stocks are up 6% year-to-date, still in the first quarter.  That’s an aggressive run for the broad stock market, and we’re now probably seeing the early days of the first dip, on the first spell of profit taking.

What about oil?  Oil and stocks traded tick for tick for the better part of last year, first when oil crashed to the mid-$20s, and then when oil proceeded to double from the mid-$20s.  Over the past few days, oil has fallen out of it’s roughly $50-$55 range of the Trump era.  Is it a drag on stocks and another potential disrupter?  I don’t think so.  Oil became a risk to stocks and the global economy last year because it was beginning to trigger bankruptcies in the American shale industry, and was on pace to spread to banks, oil producing countries and the global financial system.  We now have an OPEC production cut under the belt and a highly influential oil man, Tillerson, running the State Department.  With that, oil has been very stable in recent months, relative to the past three years.  It should stay that way – until demand effects of fiscal policy start to show up, which should be very bullish for oil.

In our Billionaire’s Portfolio, we’re positioned in a portfolio of deep value stocks that all have the potential to do multiples of what broader stocks do — all stocks owned and influenced by the world’s smartest and most powerful billionaire investors.  Join us today and we’ll send you our recently recorded portfolio review that steps through every stock in our portfolio, and the opportunities in each.  ​ 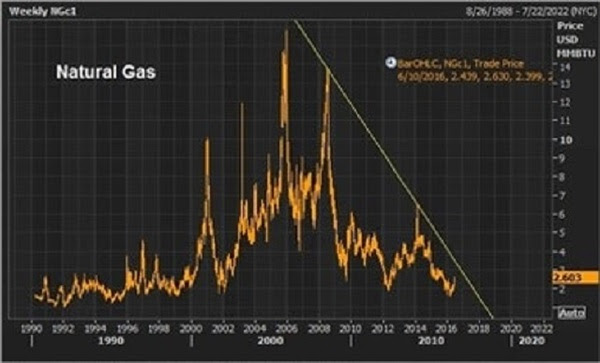