This violent repricing of the tech giants came with clear warnings (i.e. the tightening of regulatory screws).

Now that we have it.  And it is very healthy, and needed.

As we discussed yesterday, I would argue we are seeing regulation priced-in on the tech giants, which can create a more level playing field for businesses, more broad-based economic activity, and a more broad-based bull market for stocks.  This is a theme we’ve been discussing in my daily note here for quite sometime.

And I suspect now, we can see the areas of the stock market that have been beaten down, from the loss of market share to the tech giants, make aggressive comebacks.

On that note, here’s another look at the big trendline we’ve been watching in the Dow … 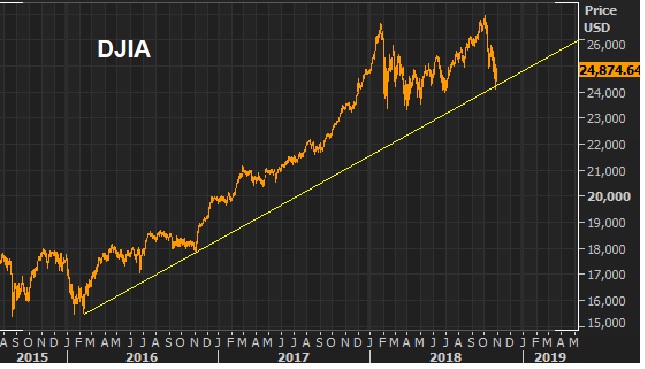 As I’ve said, it’s easy to get sucked into the daily narratives in the financial media, and it’s especially easy and dangerous (to your net worth) when stocks are declining.  They tend to influence people to sell, when they should be buying.

And as someone that has been involved in markets more than 20 years, I can tell you that it’s also very dangerous to let political views influence your perspective on markets and investing.  And I suspect we are seeing that mistake made in this environment (by pros and amateurs alike).

If you need help with your shopping list of stocks to buy on this dip, join me in my Billionaire’s Portfolio. We follow the world’s bests billionaire investors into their favorite stocks.  Click here to learn more.

Gold Is The New Bonds

Italy May Force The Hand Of The EU Toward Fiscal Stimulus

Back in May, the populist movement that gave us Grexit, Brexit and then the Trump election, gave us a new government in Italy with an “Italy first” agenda.

Italy first, means EU second.  And that puts the future of the European Union and the European Monetary Union in jeopardy.  Today, the new government made that clear by rejecting EU fiscal constraints, in favor of running a bigger deficit spending.

This puts the game of poker the European Union has been playing since the financial crisis erupted, front and center (again).

As we discussed back in May, this story is looking a lot like Greece, which used the threat of leaving the euro as leverage to negotiate some relief from austerity and reforms. It was messy, but it gave them a stick, in a world where the creditors (the ECB, Eurogroup and IMF) had been burying the weak economies in Europe in harsh austerity since the financial crisis.

As the third largest euro zone constituent, Italy brings a lot more leverage in negotiating, in this case, the EU rulebook. We may see this all result, finally, in a relaxing of the fiscal constraints that have suppressed the economic recovery in the euro zone in the post-Great Recession era. And Italy’s pushback may lead the way for a euro-wide fiscal stimulus campaign — following the lead of Trumponomics.

The Fed moved again today on rates, as the market expected. This is the eighth quarter point hike in this post-QE normalization on rates. And this now puts the Fed Funds rate at the range of 2%-2.25%.

Now, the markets will pick apart the statement and endlessly parse the Fed Chair’s words in the press conference. But let’s step back and take a look at the impact of these Fed hikes thus far.

We know the economy is running at the best pace since before the financial crisis. We know that the jobless rate is near record lows. We know that consumer credit worthiness is at record levels. This has all happened, despite the Fed’s rate hikes.

What about debt service coverage? As rates are moving higher, are consumers showing signs of getting squeezed?

So the big question is, how has the Fed’s exit of QE effected the consumers ability to service debt? Are higher rates hurting?

Well, they started hiking rates in the fourth quarter of 2015. Total debt service at that time was 10.1%. That’s virtually unchanged from today. And the mortgage piece was 4.5%. That’s actually a touch higher than today.

Bottom line: The Fed’s normalization on rates has not damaged the consumer, nor has it killed the housing market.

With that, while most have been watching the Fed closely for how it’s delicately handling the exit of QE, the more important spot to watch will be how Europe and Japan manage their exits. Hopefully, the U.S. economy is hot enough, at that point, to withstand the move in longer term U.S. rates that will come with the end of global QE.

This is in a world where rates are low, corporate profits are growing at 20% and the economy is on pace to have above trend growth.

Great traders love when prices are detached from fundamentals, especially when it’s driven by fear or euphoria.  This was a clear disconnect.  And you could argue that there has been a bit of both fear and euphoria driving it (fear priced into the Dow about trade wars, and euphoria priced into the tech giants on the idea that the burgeoning monopolies would go unchecked forever until all competition is left for dead).

Both the fear and the euphoria were misguided for all of the reasons we discuss almost daily in my Pro Perspectives note.

And now we’re seeing a convergence.  In just two weeks, that performance gap between the Dow and Nasdaq has now closed from fifteen percentage points to nine percentage points.  And the Dow still has a lot of room to run.  It remains just under the highs from January.

Now, yesterday we talked about the opportunity for Japan to benefit from forced trade reform in China.  Other big beneficiaries?  Emerging market economies.

In short, all of the countries that have been short-changed on their global trade competitiveness because of China’s weak currency policies, should benefit in a world where China is held to a standard of fair trade.

That’s why Japanese stocks had a huge run yesterday (and expect it to continue).  And that’s why EM stock markets were big movers today.  The Frontier Markets ETF (FM) is still down 14% on the year.  With the idea that these countries may get a better crack at global demand, I suspect these stock markets could be in for a big bounce.

If you haven’t joined the Billionaire’s Portfolio, where you can look over my shoulder and follow my hand selected 20-stock portfolio of the best billionaire owned and influenced stocks, you can join me here.
Japanese Stocks May Be Big Winner On China Trade Reform

Yesterday Trump made good on his promise by announcing another $200 billion in tariffs on China.

To the surprise of many, stocks went up. Why?

Perhaps it’s because reforming the way the world deals with China is a good thing.  Remember, China’s currency manipulation over the past two decades led to the credit bubble, which ultimately led to the financial crisis. And as long as the rest of the world continues to allow China to maintain a trade advantage (dictated by their currency manipulation): 1) they will manufacture hot economic growth through exports, 2) the global cycle of booms and bust will continue, and 3) the wealth transfer from the rest of the world to China will continue.

With this in mind, as I’ve said, the trade dispute is all about China – everything else Trump has taken on (Canada, Mexico, Europe) has been to gain leverage on getting movement in China.

With Trump now making it very clear that he won’t back down until major structural change takes place in China, it’s no surprise that one of the biggest winners of the day (following the further economic sanctions on China) was Japan!

The Nikkei was up big today.  And it was Japanese stocks that set the tone for global markets on the day.  As a signal that China’s days of cornering the world’s export markets may be coming to an end, Japan is in position to be a big winner.

Remember, while much of the world has returned to new record highs following the global financial crisis, Japan remains 40% away from the record highs set nearly 30 years ago.

Musk Has Emboldened The Shorts In Tesla – Look Out Below!
Why Stocks Can Go Much Higher