China Running At Worse Than 2009 Levels

We’ve talked about the struggling Chinese economy this week.

As I’ve said, much of the key economic data in China is running at or worse than 2009 levels (the depths of the global economic crisis).

And the data overnight confirmed the trajectory:  lower.

As we’ve discussed, this lack of bounce in the Chinese economy (relative to a U.S. economy that is growing at better than 3%) has everything to do with Trump squeezing China. 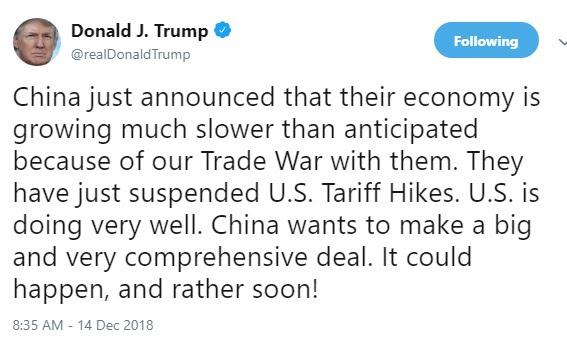 The question:  Has China retaliated with more than just tit-for-tats on trade?  Have they been the hammer on U.S. stocks?  It’s one of the few, if not only, ways to squeeze Trump.  As we discussed last week, when the futures markets re-opened (at 6pm) on the day of mourning for the former 41st President, there was a clear seller that came in, in a very illiquid period, with an obvious motive to whack the market. It worked.  Stocks were down 2% in 2 minutes.  The CME (Chicago Mercantile Exhange) had to halt trading in the S&P futures to avert a market crash at six o’clock at night.

Now, cleary stocks have a significant influence on confidence.  You can see confidence wane, by the day, as stocks move lower.  And, importantly, confidence fuels the decisions to spend, hire and invest.  So stock market performance feeds the economy, just as the economy feeds stock market performance.   The biggest threat to a fundamentally strong economy, is a persistently unstable stock market.  In addition, sustaining 3% growth in the U.S. will be difficult if the rest of the world isn’t participating in prosperity.

With that in mind, in my December 1 note, I said “it may be time for Trump to get a deal done (with China) and solidify the economic momentum needed to get him to a second term, where he may then readdress the more difficult structural issues with China/U.S. relations.”  That seems even more reasonable now.

We end the week with this chart of the S&P. 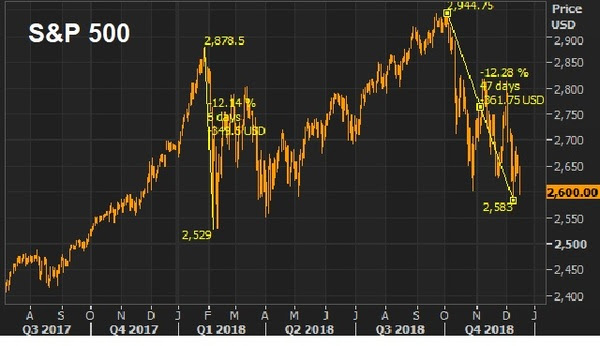