Yesterday we talked about the consumption component of GDP.  Today, we’ll take a look at investment.

Businesses invest when they’re confident about the outlook.  And that was anything but the case for the decade following the global financial crisis.

Why?  Because the politicians spent their time playing politics in Washington, instead of addressing an economy that was in desperate need of fiscal stimulus and structural change.  Instead, they swung the regulatory pendulum too far in the opposite direction.  And they played political football with debt and deficits, instead of acting to restore growth and stability.  They stifled growth, just as the Fed was desperately throwing everything at the economy to keep it going.  And it was all coming to a head by mid-2016 when global interest rates started turning negative.

But with the election came optimism.  There was at least a chance of a return of good economic times (not just domestically but globally).  We had a President with an aggressive economic stimulus plan, and a Congress in place to approve it.  With that, small business optimism popped and has soared to record highs. 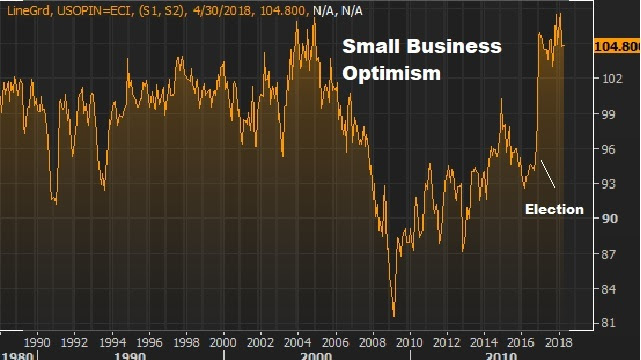 Get this:  An ISM survey shows businesses were forecasting just 2.7% capital spending growth for 2018 when they were asked back in December.  When they were asked again last month, they revised that number UP to 10.1% growth.   A big positive surprise coming down the pike.

Again, as with the consumption picture we talked about yesterday, not only is the back drop solid, but we have stimulus that is still in the early stages of feeding through the economy, which is setting the table forpositive surprises in the economic data as we head toward the second half of the year.

And with that, we finally have the pieces in place for the aggressive bounce back in growth that is characteristic of post-recession recoveries.  And that should continue to fuel stocks.