The Trade Of 2018: Commodities

We’ve talked this week about the potential for hotter demand and hotter economic growth for 2018.

Now, what’s been a big drag on this goal of achieving a hotter economy, has been wage growth.  That has been the glaring indicator, throughout the past decade, that the economy has been sluggish and vulnerable – and in need of fiscal stimulus.

Though the data on job additions and unemployment have been strong, workers have had little-to-no leverage in commanding higher wages.  We had more evidence of that in this morning’s job report. December wages came in at just a 2.5% annual change. 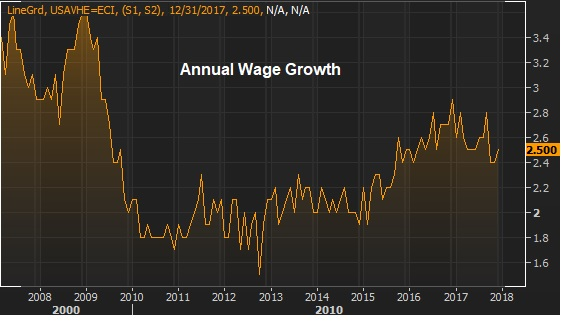 You can see in the chart above, the weak wage pressures coming out of the depths of the crisis.  That’s despite an unemployment rate that has fallen from 10% to 4% – what appears to be a tight job market. In a tight job market, employees should be able to command higher wages.  That hasn’t been the case.  That’s because the job market has been riddled with underemployment.  And underemployment has been driven, by both job seekers and job producers, from low confidence in business conditions and in the economic outlook.

This is where the new tax bill comes in.

The Tax Foundation has said the corporate tax rate cut should double the current annual change in wages. And since the tax bill has been signed, we’ve already seen huge companies cut bonus checks to employees.  If it does indeed, finally, create upward pressure in wages, then the inflation picture (which has been dead) becomes a big focus for the year.

The latest inflation reading (the Fed’s favored core PCE) is still well below the Fed’s 2% target.  Wage pressures will get inflation moving.  And among the biggest beneficiaries in this scenario will be commodities.

Remember, we looked at this chart of broad commodities earlier this week…​ 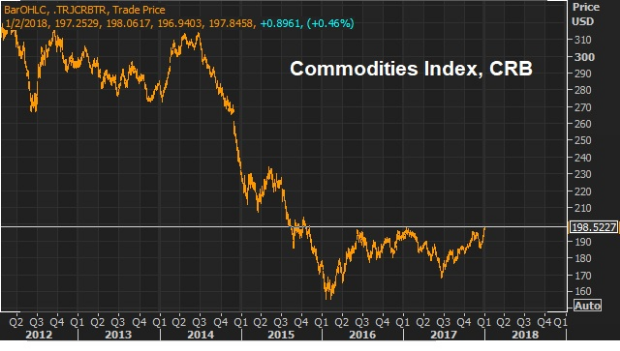 And if inflation starts moving this year, this is another chart that has a big move in store (bonds)… 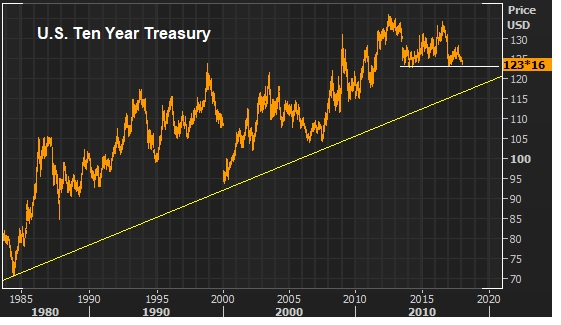 As I said earlier this week, despite the quadrupling of the stock market from the 2009 bottom, money may just be in the early stages of moving out of bonds and cash, and back into stocks.