Interest rates and stocks are on the move today (higher), following the vote last night in the Senate to pass the budget.  This opens the way for an approval on the tax plan.

​As stocks continue to print new record highs, so does policy execution for the Trump administration (the latter the cause, the former the effect).

​So we’re seeing more and more of the pro-growth plan fall into place.  Markets have been telling us this (betting on this) for a while.

​Remember, we talked about the prospects that hurricane aid could kickstart the Trump infrastructure plan (proposed at $1 trillion over 10 years). There’smore progress on that front in the past week.

Among the pillars of Trump’s growth plan, this one (infrastructure/government spending) looked to be among the long shots given the politicians can always play the debt card to fight it.  But then the hurricanes hit.

After Irma rolled through Florida the estimated damages for both Harvey and Irma were estimated at $200 billion.  Then Hurricane Maria decimated Puerto Rico.  Estimated damages there are now $95 billion.  I’ve thought we’ll ultimately see a 12-figure package out of Congress in response to the hurricanes.  The ultimate federal aid on Katrina was $120 billion.

In September Congress approved $15 billion in aid for hurricane victims.  They just approved another $35 billion!   This quiet government spending piece, that will substantially grow from here, may turn out to be the most powerful in terms of driving wage growth and economic growth.

​So tax reform and infrastructure, two big pillars of Trumponomics continue to progress.  And on the deregulation front, Trump has already been aggressively peeling back regulations that have crushed some industries, while ramping UP regulatory scrutiny on Silicon Valley, as we discussed yesterday.

​Some of the top venture capitalists in Silicon Valley said this week that they expect to see some failures this year of startups once valued north of a billion-dollar. That’s a result of less money flowing that direction, less government favor, and more money flowing back into publicly traded stocks.

​​With that in mind, let’s take a look at the chart on Amazon to finish the week … 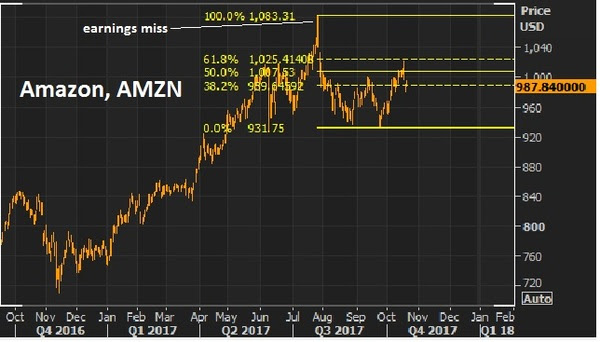 ​We talked about Amazon’s miss on earnings back on July 27th as the catalyst to take profit on the FAANG trade (the loved tech giants).  The top continues to hold in Amazon.