We looked at small caps last week when the the Russell 2000 broke to new highs.

​Remember, at that point, small–caps had done only 9% on the year at this point. That’s against 13% for the S&P and Dow. 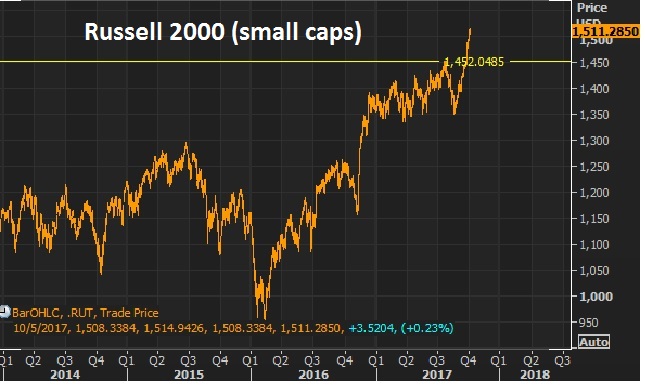 The Russell 2000 is now up 12% since the lows of August (up 11% ytd) and if you bought the small cap index on the Monday before the elections last year, you’re up 26%.  But small caps continue to lag the bigger cap market. And that makes the last quarter a very intriguing opportunity to own small caps.

​Bull markets tend to lift all boats.  And with that, equal-dollar weighted small caps tend to outperform equal-dollar weighted large caps in bull markets (in some cases by a lot). This one (bull market) looks like plenty of room to go in that regard.  And small cap companies should have more to gain from a corporate tax cut as the tend to have fewer ways to shelter income (relative to big multinationals).

​Now, with that bull market assertion, let’s talk about the general uneasiness that seems to exist (and has for a while) from watching the continued climb in stocks.

As we’ve discussed, you often here the argument that the fundamentals don’t support the level of stocks.  It’s just not true.  The fundamental backdrop continues to justify and favor higher stocks.  We have the prospects of fiscal stimulus building, which will be poured onto an already fertile economic backdrop — with low rates, cheap commodities, record consumer high credit worthiness and low unemployment.

​As the old market adage goes, “bull markets are born on pessimism, grow on skepticism, mature on optimism and die on euphoria.”  I don’t think anyone could argue we are currently in the state of euphoria for stocks. And as the great macro trader Paul Tudor Jones has said, “the last third of a great bull market is typically a blow-off, whereas the mania runs wild and prices go parabolic” (i.e. euphoria can last for a while).

​Finally, let’s revisit this analysis from billionaire Larry Robbins on the influence of low interest rates, Fed policy and oil on markets.  He says every time ONE of these (following) conditions has existed, the market has produced positive returns.
​
Here they are:

Again, his study showed that there has NEVER been a down year stocks, when any ONE of the above conditions is met.