Improving Prospects That We Will See Fiscal Stimulus

We’ve past yet another hurdle of concern for markets this past week.  Last Friday this time, we had a potential catastrophic category 5 hurricane projected to decimate Florida.

​Though there was plenty of destruction in Irma’s path, the weakening of the storm through the weekend ended in a positive surprise relative what could have been.

​So we end with stocks on highs.  And remember, we’ve talked over past month about the quiet move in copper (and other base metals) as a signal that the global economy (and especially China) might be stronger than people think.  Reuters has a piece today where they overlay a chart of economist Ed Yardeni’s “boom-bust barometer” over the S&P 500.  It looks like the same chart.

What does that mean? The boom-bust barometer measures the strength of industrial commodities relative to jobless claims.  Higher commodities prices and lower unemployment claims equals a rising index as you might suspect (i.e. suggesting economic boom conditions, not bust).  And that represents the solid fundamental back drop that is supporting stocks.

​With that in mind, consider this:  In the recent earnings quarter, earnings and revenue growth came in as good as we’ve seen in a long time for S&P 500 companies. We have 4.4% unemployment. The rise in equities and real estate have driven household net worth to $94 trillion – new record highs and well passed the pre-crisis peaks (chart below). 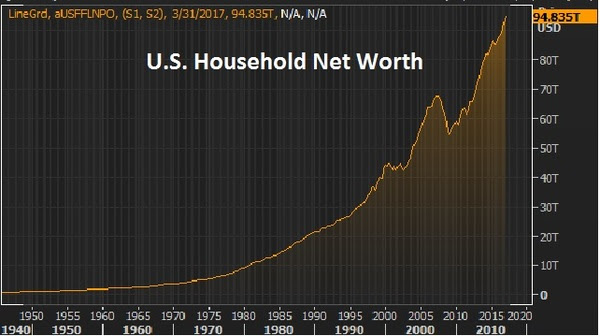 But what happens to be the key long-term driver of economic growth over time?  Credit creation (debt).  The good news: The appetite for borrowing is back.  And you can see how closely GDP (the purple line, economic output) tracks credit growth. 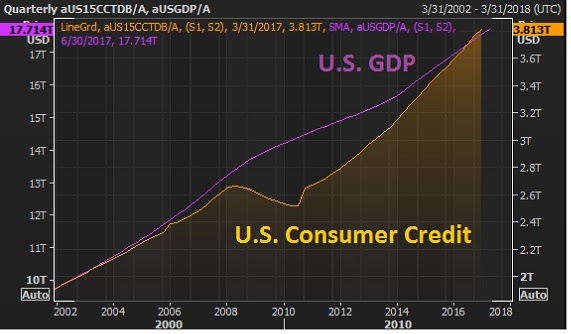 Meanwhile, and importantly, consumers have never been so credit worthy.  FICO scores in the U.S. have reached all-time highs.  So despite what the media and some of Wall Street are telling us, things look pretty darn good.  Low interests have produced recovery, without a ramp up in inflation.

But as I’ve said, it has proven to have its limits.  We need fiscal stimulus to get us over the hump – on track for a sustainable recovery.  And we now have, over the past two weeks, improving prospects that we will see fiscal stimulus materialize — i.e. policy execution in Washington.

​To sum up:  People continue to look for what could bust the economy from here, and are missing out on what looks like the early stages of a boom.