Yesterday we talked about the warning signal flashing from the German bond market.  That continues today.

While global stocks and commodities are reflecting broad optimism about the new pro-growth government in the U.S., the yield on 2-year German government bonds is sending a negative message — it hit record lows yesterday, and again today — trading to negative 90 basis points.  You pay almost 1% to loan the German government money for two years.

Here’s a longer term look at German yields, for perspective… 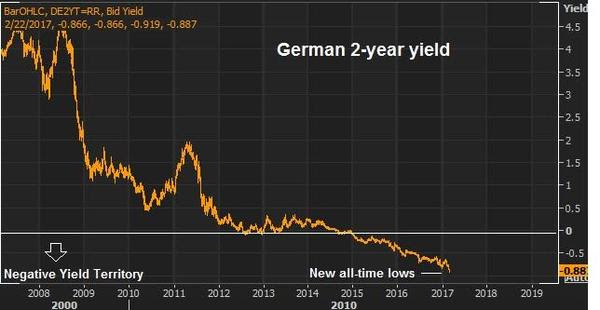 And here’s the divergence since the election between German and U.S. 2 year yields… 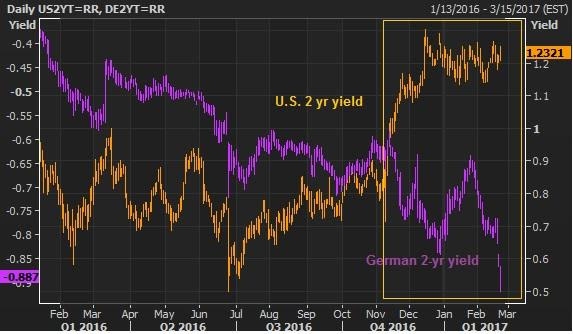 This divergence is partially driven by rising U.S. yields on optimism about the outlook, about inflationary policies, and about the Fed’s response.  On the other hand, German yields have gone the other way because 1) the ECB is still outright buying government bonds through its QE program (bond prices go up, yields go down), and 2) capital flows into bonds, in search of safety, because a Trump win makes another populist vote in Europe more likely when the French elections role around in May.

So that bleed to new lows in the German 2-year yield sends a warning signal to global markets. Today we have a few more reasons to think this could be a signal that the optimism being priced into U.S. markets at the moment could take a breather here.

Trump’s Secretary of Treasury, Mnuchin, was doing his first rounds on financial TV this morning and gave us some guidance on a timeline for policies and impact.  Most importantly, he says we’ll see limited impact from Trump policies in 2017, and that the growth impact won’t come until 2018.

Let’s consider how that can impact where the Fed stands on their forecasts for monetary policy.

Remember, they spent the better part of 2016 walking back on the promises they had made for 4 rate hikes last year.  And then, when they finally moved for thefirst time this past December, following the election and a rallying stock market, they reversed course on all of the dovish talk of the past months, and re-upped on another big rate hiking plan for 2017.

Though they don’t like to admit it, we can only assume that when they considered a massive fiscal stimulus package coming, like any human would, they became more bullish on the economy and more hawkish on the inflation outlook.

So now as Mnuchin tells us not to expect a growth impact from Trump policies until next year, maybe the Fed lays off the tightening rhetoric for a while.

With all of this in mind, another interesting dynamic in markets today, the Dow shrugged off some weakness early on to trade higher most of the day, posting another new record high.  Meanwhile small caps diverged, trading weaker all day.  And gold traded to the highest level since November 11.  Remember this chart we’ve looked at, which looks like higher gold to come (a lower purple line), and lower yields. 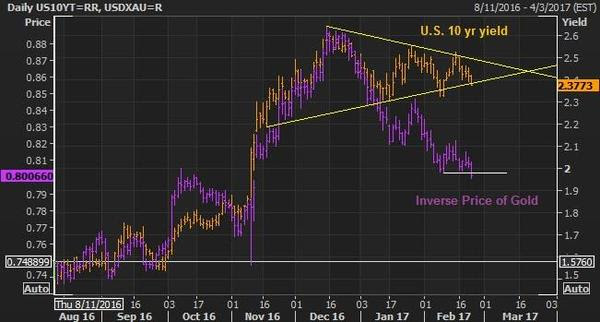 This would all project a calming for the inflation outlook, which would be good for the health of markets.  Among the biggest risk to Trumponomics is hot inflation, too fast, and a race higher in interest rates to chase it.

To peek inside the portfolio of Trump’s key advisor, join me in our Billionaire’s Portfolio. When you do, I’ll send you my special report with all of the details on Icahn, and where he’s investing his multibillion-dollar fortune to take advantage of Trump policies. Click here  to join now.