What A Difference A Year Makes

Remember this time last year?  The markets opened with a nosedive in Chinese stocks.  By the time New York came in for trading, China was already down 7% and trading had been halted.  That started, what turned out to be, the worst opening stretch of a New Year in the history of the U.S. stock market.

The sirens were sounding and people were gripping for what they thought was going to be a disastrous year.  And then, later that month, oil slid from the mid $30s to the mid $20s and finally people began to realize it wasn’t China they should be worried about, it was oil.  The oil price crash was a ticking time bomb, about to unleash mass bankruptcies on the energy industry and threaten a “round two” of global financial crisis.

What happened?  Central banks stepped in.  On February 11th, the Bank of Japan intervened in the currency markets, buying dollars/selling yen.  What did they do with those dollars?  They must have bought oil, in one form or another.  Oil bottomed that day. China soon followed with a move to boost bank lending, relieving some fears of a global liquidity crunch.  The ECB upped its QE program and cut rates.  And then the Fed followed up by taking two of their projected four rate hikes off of the table (of which they ended up moving just once on the year).

What a difference a year makes.

There’s a clear shift in the environment, away from a world on liquidity-driven life support/ and toward structural, growth-oriented change.

With that, there’s a growing sense of optimism in the air that we haven’t seenin ten years.  Even many of the pros that have constantly been waiting for the next “shoe to drop” (for years) have gone quiet.

Global markets have started the year behaving very well. And despite the near tripling from the 2009 bottom in the stock market, money is just in the early stages of moving out of bonds and cash, and back into stocks. Following the election in November, we are coming into the year with TWO consecutive record monthly inflows into the U.S. stock market based on ETF flows from November and December.

The tone has been set by U.S. markets, and we should see the rest of the world start to play catch up (including emerging markets).  But this development was already underway before the election.

Remember, I talked about European stocks quite a bit back in October.  While U.S. stocks have soared to new record highs, German stocks have lagged dramatically and have offered one of the more compelling opportunities.

Here’s the chart we looked at back in October, where I said “after being down more than 20% earlier this year, German stocks are within 1.5% of turning green on the year, and technically breaking to the upside“… 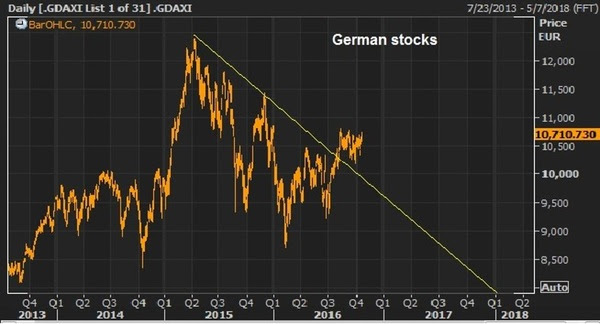 And here’s the latest chart… 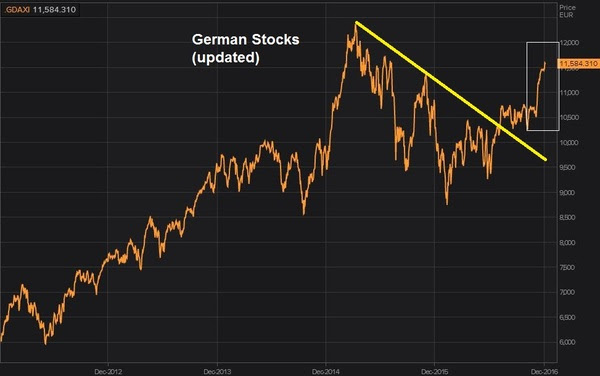 You can see, as you look to the far right of the chart, it’s been on a tear. Adding fuel to that fire, the eurozone economic data is beginning to show signs that a big bounce may be coming. A pop in U.S. growth would only bolster that.

And a big bounce back in euro zone growth this year would be a very valuabledefense against another populist backlash against the establishment (first Grexit, then Brexit, then Trump).  Nationalist movements in Germany and France are huge threats to the EU and euro (the common currency).  Another round of potential break-up of the euro would be destabilizing for the global economy.

With that, as we enter the year with the ammunition to end the decade long economy rut, there are still hurdles to overcome.  Along with Trump/China frictions, the French and German elections are the other clear and present dangers ahead that could dull the efficacy of Trumponomics.

For help building a high potential portfolio, follow me in our Billionaire’s Portfolio, where you look over my shoulder as I follow the world’s best investors into their best stocks.  Our portfolio more than doubled the return of the S&P 500 in 2017. You can join me here and get positioned for a big 2017.