As we said yesterday, we’ve seen a slew of threatening events come and go over the course of the past seven years, and with each passing of those events, the heightened scrutiny of the economy comes and recession predictions.  Each has been wrong.  The Brexit vote is just the latest.

With the UK referendum results looming (as of this writing), today we want to revisit some of our bigger picture perspective on the U.S. economy.  The data just doesn’t support the gloom and doom scenarios.

The Fed has manufactured a recovery by promoting stability.  And they’ve relied on two key asset prices to do it: stocks and housing.  Today we want to look at a few charts that show how important the stock and housing market recoveries have been.

While QE and the Fed’s ultra easy policy stance couldn’t directly create demand in a world of deleveraging, it did (and has) indirectly created demand by promoting stability, which restored confidence.  Without the confidence that the world will be stable, people don’t spend, borrow, lend or hire, and the economy goes into a deflationary vortex.

But by promising that they stand ready to act against any futures shocks to the economy (and financial markets), investors feel comfortable investing again (stocks go higher).  When stocks go higher and the environment proves stable, employers feel more confident to hire.  This all fuels demand and recovery.  And, of course, the Fed has pinned down mortgage rates at record lows, which promotes a housing recovery, and gives underwater homeowners (at one point, more than 25 million of them) a since that paper losses will at some point be overcome, and that gives them the confidence to spend money again, rather sit on it.

Along the path of the economic recovery, the Fed (and other key central banks) has been very sensitive to declines in stocks.  Why?  Because declining stocks has the ability to undo what they’ve done.  And it confidence breaks again, it will be far harder to restore it.

The first chart here is the S&P 500.  Stocks bottomed in March of 2009, when the Fed announced a $1 trillion QE program.

How does housing look?  Of course, bursting of the housing bubble was the pin that pricked the global credit bubble.  Housing prices in the U.S. have been in recovery mode since 2012.  Still, housing has a ways to go.  This is a very important component for the Fed, for sustainable recovery.

Housing prices have bounced 37% off of the lows (for 20 major cities in the index) – but remains about 10% off of the pre-crisis highs.

How has the recovery in stocks and housing reflected in the broader economy?

As stocks surpassed pre-crisis highs in 2013, so did U.S. per capita GDP.

While debt continues to be a big structural problem for the U.S and the rest of the world, growth goes a long way toward fixing that problem.

And growth, low interest rates, higher stocks and higher housing prices goes a long way toward restoring household net worth.  As you can see in the chart below, we have well recovered and surpassed pre-crisis levels in household net worth…

What is the key long-term driver of economic growth overtime?  Credit creation.  In the next chart, you can see the sharp recovery in consumer credit since the depths of the economic crisis (in orange).  This excludes mortgages.  And you can see how closely GDP (economic output) tracks credit growth (the purple line).

What about deleveraging?  It took 10 years to build the global credit bubble that erupted in 2007.  Based on historical credit bubbles, it typically takes about as long to de-lever.  So 10-years of deleveraging would put us at year 2017.

You can see in the chart below, the average annual growth rate of consumer credit over the past 55 years is 7.9%.  Over the past five years, consumer credit growth has been solid, just under the long term average.  Meanwhile, FICO scores in the U.S. have reached an all-time high. 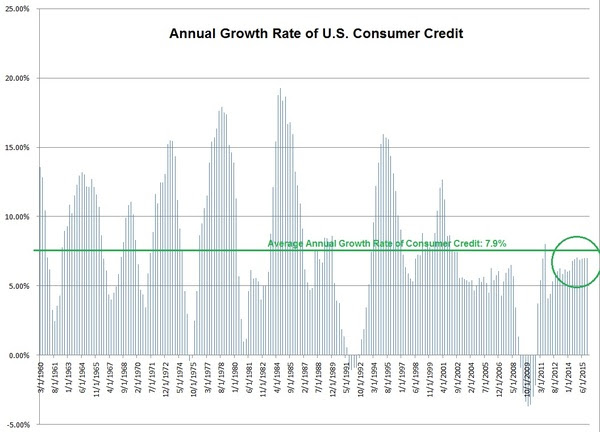 With any volatility in stocks, there comes increased scrutiny on the economy and people like to wave the red flag anywhere they find soft economic data. But consumption makes up more than 2/3 of the U.S. economy.  And you can see from the charts above, the consumer is in a solid position.  Still, stocks and housing remain key drivers of the recovery.  The Fed is well aware of that.  With that, don’t expect the Fed, in the current economic environment, to do anything to alter the health of the housing and stock markets.

Have a great night.

To follow our big picture views and our hand selected portfolio of the best stocks owned by the best billionaire investors in the world, join us in our Billionaire’s Portfolio.