On Tuesday we talked about the quiet bull market in  commodities. Today we want to talk about one specific commodity that has been lagging the sharp rebound in oil, but is starting to make a big-time move.  It’s natural gas. And this is an area with some beaten up stocks that have the potential for huge bounce backs.

Natural gas today was up almost 6% to a six month high.  The U.S. Energy Information Administration said in its weekly report that natural gas storage rose less than what analysts had forecast.  But that was just an extra kick for a market that has been moving aggressively higher in the past NINE days (up 37% in nine days).

Now, we should note, nat gas is a market that has some incredible swings.  Over the past three years it has traded as high as $6.50 and as low as $1.64.

For perspective on the wild swings, take a look at this long term chart. 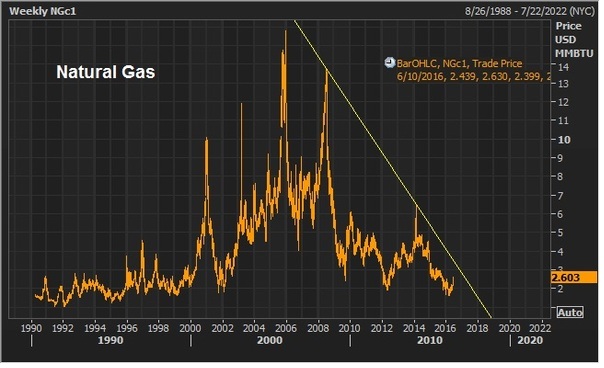 You can see we’re coming off of a very low base.  And the moves in this commodity can be dramatic.

Three months ago natural gas was continuing to slide, even as oil was staging a big bounce.  But natural gas has now bounced 58% after sniffing around near the all-time lows. Meanwhile, oil has doubled.

Based on the backdrop for oil, broader commodities, the economy we’ve been discussing, and the acknowledging the history of natural gas prices, we could be looking at early stages of a big run in nat gas prices.

Summer is one of the most volatile periods for natural gas with the combination of heat waves, hurricanes and potential weather pattern shifts such as La Nina.  During the summer months, a 50% move in the price of natural gas is not uncommon. Another 50% rise by the end of the summer would put it around $4. And four bucks is near the midpoint of the $6.50 – $1.65 range of the past three years.

Billionaires investor David Einhorn has also perked up to the bull scenario in nat gas.  In his most recent investor letter his big macro trade this year is long natural gas. Here’s what he had to say: “Natural gas prices are not high enough to justify drilling in all but the very best locations. The industry has responded by dramatically reducing drilling activity. As existing wells deplete, supplies should fall. The high cost of liquefying and transporting natural gas limits competition to North American sources. Current inventories are high following a period of over-drilling and a record warm winter. However, the excess inventory is only a couple percent of annual production, which has already begun to decline. Normal weather combined with lower production could lead to a shortage within a year.”

This all contributes to the bullish action we’re seeing across commodities, led by the bounceback in oil.  The surviving companies of the energy price bust have been staging big comebacks, but could have a lot further to go on a run up in nat gas prices.

In our Billionaires Portfolio, we have an ETF that has 100% exposure to oil and natural gas – one we think will double by next year.  Join us today and get our full recommendation on this ETF, and get your portfolio in line with our Billionaire’s Portfolio.